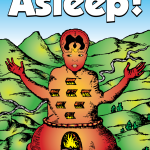 The Demiurge Emerges fron the Darkness 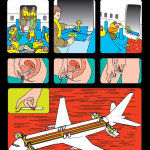 Dark Spirits are Born from the Shadow

At the beginning of time, Sophia (the world soul) broke away from Christ (the world spirit) and gave birth to Yaldabaoth, the arrogant creator-god of the Old Testament.

The exact process by which this cosmic fiasco occurred was the subject of much debate among the gnostics; in perhaps the oldest version of the story, Sophia’s desire somehow veiled infinity, casting a murky shadow which congealed into a dark ocean set apart from the realm of light:

“A veil exists between the World Above and the realms that are below; and Shadow came into being beneath the veil; and that Shadow became Matter; and that Shadow was projected apart. And what she [Sophia] had created became a product in the Matter, like an aborted fetus.”1

The pool of darkness transformed into a yawning abyss of chaotic energy and began to produce terrible, half-formed mutants:

“[And] as for the shadow, the powers which came into being after [it] called it “the limitless Chaos.” And out of it every race of gods was brought forth, both one and the other and the whole place…”2

“The universe is not born of the design or act of a genetic God, particularly since the genetic God in the Bible is only a degenerate God. The universe emerges from the process of the infinite retreating upon itself, as […]

There is nothing… that there is no God and no universe; that there is only empty space, and in it a lost and homeless and wandering and companionless and indestructible Thought. And that I am that thought. And God, and […]

The Second Law of Thermodynamics

“The deep structure of change is decay. What decays is not the quantity but the quality of energy. [High quality energy] is energy that is localized, and potent to effect change. In the course of causing change it spreads, becomes […]