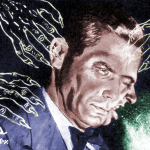 The Breath of Life

Eve was not produced from Adam’s rib; rather, Adam was created by fallen angels who abandoned him as lifeless experiment, a soulless robot who lay twitching helplessly on the ground until Sophia’s daughter Eve descended from the heavens and brought him to life:

“When Eve saw her co-likeness cast down, she pitied him, and she said, ‘Adam, live! Rise up on the earth!’ Immediately her word became a deed… Adam rose up [and] he opened his eyes. When he saw her, he said, ‘You will be called ‘the mother of the living’ because you are the one who gave me life.‘”1

In yet another version of the story, Sophia took pity on Adam and tricked Yaldabaoth into bringing him to life by sacrificing some of his own, stolen power:

“Yaldabaoth breathed into man the breath of life [Gen. 2:7] and was thus secretly deprived of the power; hence man had mind and desire, and these are the parts of man which are saved.”2

In its most general formulation, morphic resonance means that the so-called laws of nature are more like habits. The hypothesis of morphic resonance also leads to a radically new interpretation of memory storage in the brain and of biological inheritance. […]

The suggestion of a genetically transferable characteristic being walled off from utilization was startling. Is it possible that we carry in our cells for generation after countless generation information that is waiting only for the proper signal before emerging? And […]

In a profound new scientific model concerning memory known as Morphic Resonance, (that is startlingly similar to the Gnostic concept of Anthropos….), the human DNA molecule becomes a receiver for the human being signal, and this signal contains not only […]