Tempted by the Serpent 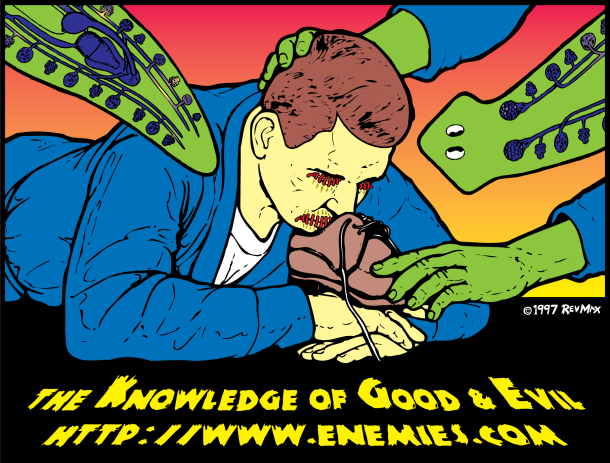 The serpent arose from inside Adam and Eve as a whispering voice which prompted them to curiousity and rebellion, urging them to disobey Yaldabaoth and eat from the tree.

“Then the one who is wiser than all of them, this one who was called “the beast,” came. And when he saw the likeness of their mother, Eve, he said to her, “What is it that God said to you? ‘Don’t eat from the Tree of Knowledge’?”

He said to her, “Don’t be afraid! You certainly shall not die. For he knows that when you eat from it your mind will be sobered and you will become like God, knowing the distinctions which exist between evil and good men. For he said this to you, lest you eat from it, since he is jealous.”1

The cultists have been told not to talk, that conversing with “Satan” will allow “Satan” to get to them. They are advised to close their ears, not to listen, to shut “Satan” out. Often the cultists try to block themselves off from those around them with chanting or trances. They believe their new life is…

Satan’s goal is to teach humans to regain the conscious control of their spirit bodies. Many do. Once this is achieved, these people can perceive the spirit world as well as the physical world. They can talk freely with demons, leave their physical bodies with their spirit bodies, and with full conscious awareness go places…

SOCRATES: Just what you said, I believe…. Haven’t you admitted that the Rulers…. sometimes mistake their own best interests, and that at the same time it is right for the subjects to obey?…

THRASYMACHUS: Yes, I suppose so.

SOCRATES: Well, that amounts to admitting that it is right to do what is not to the interest of the Rulers or the stronger party…. You with your intelligence must see how that follows.

Morality is the theory that every human act must be either right or wrong, and that 99% of them are wrong.

Ninety-nine percent of who you are is invisible and untouchable.