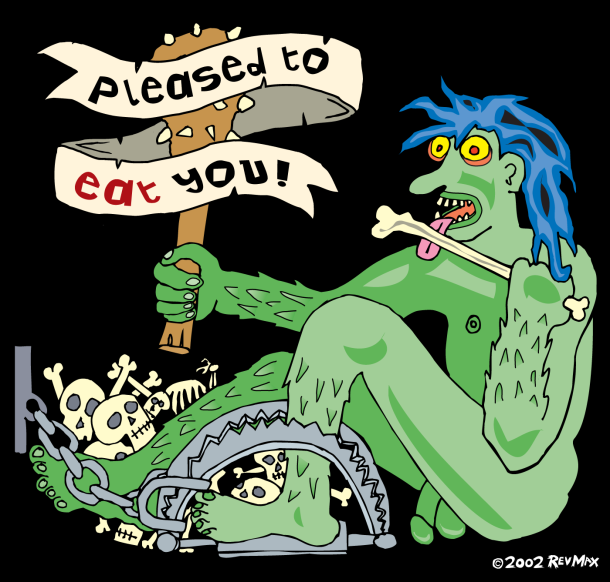 The idea that an omnipotent creator god could callously seek to exterminate an entire species for the sins of a few shocks and outrages the conscience, but the Biblical “flood” had nothing to do with human sin; instead, fallen angels had been skinny-dipping in the human gene-pool:

“To theologians and philosophers, it is a fact, that from the copulation of humans [men or women] with the demon, human beings are sometimes born… the children generated in this manner by the incubi are tall, very strong, very daring, very magnificent and very wicked. We also read in the Scriptures (Genesis 6:4) that giants were born as a result of intercourse between the sons of God and the daughters of Man: this is the very letter of the sacred text.

Now these giants were men of tall stature… and far superior to other men. Besides their monstrous size, they called attention by their strength, their plunders, their tyranny. And it is to the crimes of these giants that we must attribute the main and primary cause of the Flood…”1

An apocryphal Jewish scripture called the “Book of Enoch” tells a similar story: 200 fallen angels called the “Watchers” left Heaven to “sleep with [human] women,” teaching them how to make weapons, cosmetics, jewelry, and “mirrors.”2

The children spawned by these interspecies couplings were called “Nephilim,” or “the Fallen Ones” – fierce ogres who ravaged the planet, sodomizing and eating men, women and animals before finally attacking and devouring each other:

“…when men could no longer sustain them, the giants turned against them and devoured mankind. And they began to sin against birds, and beasts, and reptiles, and fish, and to devour one another’s flesh, and drink the blood…”3

God was so disgusted with the Nephilim that he imprisoned them deep in the bowels of the Earth, there to await their final destruction on Judgement Day.

While the Bible and Enoch both seem to agree that these angelic hybrids were freakishly large, it’s unclear how the Nephilim walked (let alone fell to Earth) in defiance of the laws of physics:

“We could not be twice as tall as we are, for the kinetic energy of a fall would then be 16 to 32 times as great, and our sheer weight (increased eightfold) would be more than our legs could support. Human giants of eight to nine feet have either died young or been crippled early by failure of joints and bones… our size has limited our activities and, to a great extent, shaped our evolution.”4

Perhaps the giants weren’t so gigantic after all – were they still cannibals, or is this an exaggeration too?

If the “giants” were indeed cannibalistic, then somehow the practice has survived their extermination – the Bible even tells us that many of Noah’s descendents eventually succumbed to this same, repulsive habit:

So are humans really descended from a race of subterranean ghouls? We still have the gifts the “Watchers” brought with them – mirrors, jewelry and edged weapons – but there’s nothing particularly sinister about these.

What is chilling to consider is the fact that up to 50% of modern Europeans are immune to prion diseases like “mad cow” – diseases which spread when abnormally shaped proteins (called “prions”) are introduced to the brain by contaminated meat.

How did so many modern peoples become immune to these strange, flesh-borne plagues? According to a recent study, they may owe their protection to the depraved appetites of our cave-dwelling ancestors:

“The University College of London Science journal has published a study…revealing that some of our prehistoric ancestors are believed to have been frequent consumers of human flesh, which can spread “prion” diseases. The practice of cannibalism was widespread, and “not just some rarity that happened in New Guinea”, study author John Collinge said. This meant that natural selection allowed the spread of mutant versions of the prion protein genes, which would have given prehistoric humans a better chance of surviving prion disease epidemics. “What we are showing here is evidence that selection for these polymorphisms (mutations) has been widespread or happened very early in the evolution of modern humans, before human beings spread all over the planet,” Mr Collinge said.”6

Perhaps the giants’ evil influence was never removed in the first place – either that, or Noah and his crew must have have eaten a few bites of human flesh during their forty days and forty nights at sea.

Neanderthals suffered periods of starvation and may have supplemented their diet through cannibalism, according to a study of remains from northwest Spain. Paleobiologists studied samples from eight 43,000-year-old Neanderthal skeletons… [and found] evidence that bones had been torn apart, which they say could indicate cannibalism.1 http://www.livescience.com/1187-neanderthals-cannibals-study-confirms.html [↩]

Can’t put down that cigarette? You have a legitimate bone to pick with your Neanderthal relatives, according to new research. Genes passed down through interbreeding between Neanderthals and Homo Sapiens are the cause of diseases including smoking addiction, Type 2 diabetes and Crohn’s disease in humans today—unfortunate repercussions of an affair that started shortly after…

…the Middle-Eastern region was home to some of the last surviving pockets of Homo sapiens or H. neandertalensis. Therefore, it is conceivable that a Folk Memory of these creatures survived by way of mythology – but not necessarily in the way that it is imagined. In addition, it appears that the very last Neanderthals adopted…

Neanderthal as Victims of the Deluge

The Neanderthal… dominated Europe for more than 100,000 years… The sudden and mysterious disappearance of Neanderthals around 30,000 years ago would presumably be due not to a merging of the two human groups through interbreeding but more likely to some catastrophic event. (A flood, perhaps?)1 Missler, Chuck. “Continuing Conjectures: Post-Flood Nephilim” Koinonia House, 2003. http://www.khouse.org/articles/2003/462/…

If I have seen further, it is by standing on the shoulders of giants.

The Giants who formed this world into its sensual existence and now seem to live in it in chains, are in truth, the causes of its life & the sources of all activity; but the chains are the cunning of weak and tame minds which have power to resist energy, according to the proverb: the weak in courage is strong in cunning.

A dwarf on a giant’s shoulders sees the further of the two.