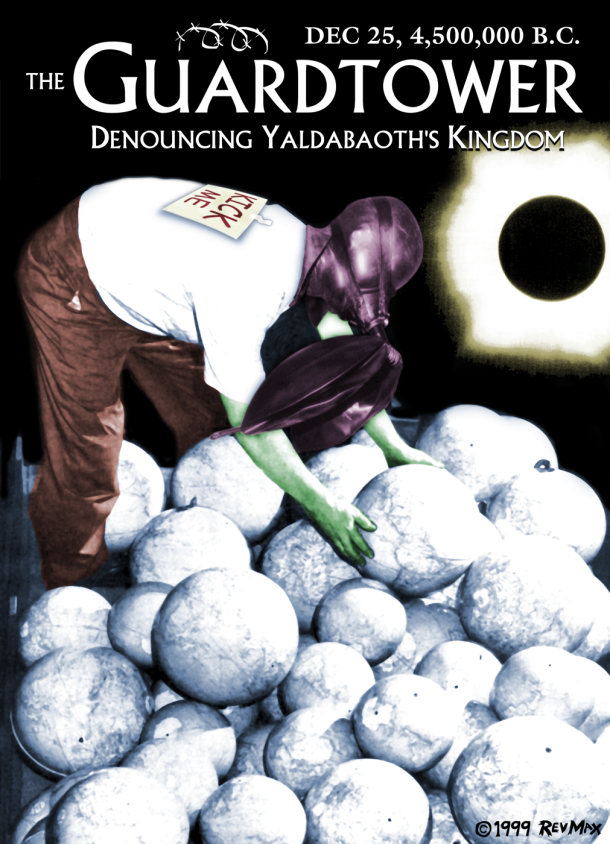 Cast down from the worlds of light, Yaldabaoth carved a new home for himself out of the  darkness:

“When the Ruler saw his greatness, he saw only himself; he did not see another one except water and darkness. Then he thought that he alone existed. His thought was made complete by means of the word, and it appeared as a spirit moving to and fro over the waters.

The Demiurge bumbled blindly along, unaware that Sophia was secretly forming the Earth through him:

“The Demiurge supposed that he made these things of himself, but he made them after [Sophia] projected them. He made Heaven without knowing Heaven… he brought earth to light without understanding earth. In every case he was ignorant of the ideas of the things he made, as well as of the Mother; and he thought he was entirely alone.”2

The Creation of the Earth

If scientists like John Barrow and Nick Bostrom are correct, then the gradual emergence of intelligent life from the small pockets of negentropy which dot our universe should eventually produce demiurge-like beings able to create universes of their own. Writes Barrow:

“It has long been recognised that technical civilisations, only a little more advanced than ourselves, will have the capability to simulate universes in which self-conscious entities can emerge and communicate with one another…”3

If the simulation of entire worlds is possible, then “fake universes” should “greatly outnumber the real ones” – and what’s more, these fake universes will all contain tiny errors:

Yaldabaoth’s creation isn’t evil, it’s just a second-rate simulation – or, as the gnostic teacher Valentinus put it, “However much a portrait is inferior to an actual face, just so is the world worse than the living realm… For the form was not reproduced with perfect fidelity…”5

The idea that we might be living in a simulated world is so fascinating because it is impossible to disprove the theory that we are living in a simulated universe. In order to see how difficult it is to disprove, consider the Brain-in-a-Vat Argument. The Brain-in-a-Vat Argument considers the situation whereby a person’s brain has…

The Feet of the Lord

If one surgically makes a horizontal section of the cranium at the level of the corpus callosum, the pattern formed by the convolutions of the brain resembles two human feet . The same pattern has given rise to a variety of symbols subsumed under the myth of the FEET OF THE LORD. The five senses…

Inadequacy of Mental Models of the Universe

We assume that the universe is real, that it exists quite independently of human thought about it. But when we come to dealing with this universe, to human manipulation and improvement of it, we are not able to come to grips directly with this reality. We can only take in the sensory impressions reaching us…

So God makes Adam and Adam walks through Eden, simply existing. But things in Eden get a little slow so God says, "Adam, for you I will create a woman." Adam is interested. "She will be everything you could possibly want in a woman, she will be beautiful, professionally and financially successful, a great mother…

…that a God like Jehovah should have created this world of misery and woe, out of pure caprice, and because he enjoyed doing it, and should then have clapped his hands in praise of his work, and declared everything to be good – that will not do at all!

The Earth is an object lesson for the apprentice gods. If you really screw up, they get told, you’ll make something like Earth.

A deaf, dumb and blind idiot could have made a better world than this.

This world… was only the first rude essay of some infant Deity, who afterwards abandoned it, ashamed of his lame performance; it is the work only of some dependent, inferior Deity; and it is the object of derision to his superiors; it is the production of old age and dotage of some superannuated Deity, and ever since his death, has run on at adventures…