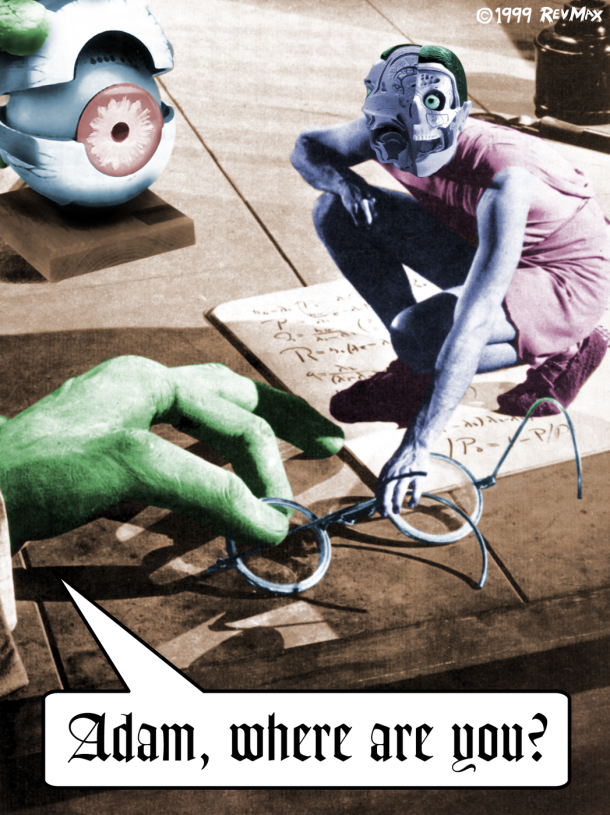 Adam, where are you?

Adam and Eve awoke from the Rulers’ brainwashing and discovered that they had been experiments, built by Yaldabaoth in a misguided effort to imprison and enslave the light from above. The Rulers moved quickly to suppress this nascent rebellion, descending from the heavens with a thunderous clap:

“Then when the Rulers knew that they had transgressed their commandment, they came in an earthquake with a great threat into Paradise to Adam and Eve in order to see the result of the help…. Then, because the Rulers did not know where they were, they said, ‘Adam, where are you?'”1

As Adam and Eve emerged from hiding, the Archons lashed out in a childish fury – only to discover that the serpent (being divine) was immune to their attacks:

“Then the rulers came to the instructor. Their eyes were blinded by him so that they were not able to do anything to him. They merely cursed him since they were impotent. Afterward they came to the woman, and they cursed her and her sons. After the woman they cursed Adam and the earth and the fruit because of him. And everything which they created they cursed…”2

Trembling with rage and frustration, the Archons decided that it would be too risky to allow Adam to remain in the Garden any longer – if he were to eat from the Tree of Life, he would not only be wiser than the Archons, but stronger too:

“They gathered together and took counsel, and they said, ‘Behold, Adam has become like one of us, so that he understands the distinction of light and darkness. Now lest perhaps… he also comes to the Tree of Life and eats from it and becomes immortal and rules and condemns us and regards us and all our glory as folly – afterward he will pass judgment on us and the world – come, let us cast him out of Paradise down upon the earth, the place from whence he was taken, so that he will no longer be able to know anything more about us.’ And thus they cast Adam and his wife out of Paradise.”3

Take a child brought up to believe the lusts of the body are dirty and wrong; that an omniscient God spies on and judges its every little sneaky mean thought and action; that it is born in sin (original sin) and can only be saved by accepting the dictates of this God’s rules. The child,…

Seen in this light, the “fall of man” depicts a failed revolution from the victor’s standpoint. For attempting to put into practice their slogan “Our bodies belong to us,” the rebels were sentenced to a life of forced labor in the sweat of their brows. “Your bodies belong to your Ruler!”- that was the response.…

The first duty of a revolutionary is to get away with it.

The God of old is dispossessed of His terrestrial empire, and every thinking being on this globe disdains Him or knows Him not. But what matter that men should be no longer submissive to Yaldabaoth if the spirit of Yaldabaoth is still in them; if they, like Him, are jealous, violent, quarrelsome, and greedy, and the foes of the arts and of beauty? What matter that they have rejected the ferocious demiurge? It is in
ourselves and in ourselves alone that we must attack and destroy Yaldabaoth.

Why attack God? He may be as miserable as we are.

The meaning of life is not to be discovered only after death in some hidden, mysterious realm; on the contrary, it can be found by eating the succulent fruit of the Tree of Life and by living in the here and now as fully and creatively as we can.

If sex and creativity are often seen by dictators as subversive activities, it’s because they lead to the knowledge that you own your own body (and with it, your voice) and that’s the most revolutionary insight of all.