The Fall of Sophia 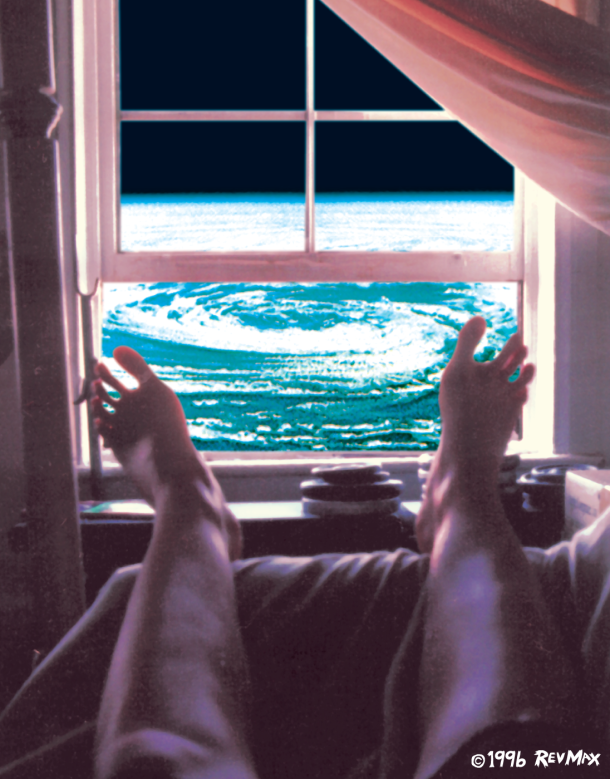 “The power which overflowed from the Woman…fell from above [and] came down directly upon the waters, when they were motionless, and set them in motion, moving boldly as far as the abysses; and it took a body for itself from them. When it was bound and weighed down by the body of matter, it lay low, though it tried to escape from the waters and ascend to the Mother, though it could not do so because of the weight of the surrounding body.”1

In the parallel universe model, the wave of possibilities is something that at first sight appears magical. Let me describe its properties. First of all, it is a wave and it can be imagined to do all the things that waves do. It undulates, vibrates, and moves through space and time.

When the wave encounters a situation that is logically impossible in a single world – a single spacetime region – the wave does something analogous to the way an ocean wave behaves when it encounters two or more spaces between piers jutting out in the ocean space. The wave splits apart. One part goes off running after one possibility and the other part follows the other possibilities. Each possibility is a reality in a different world.

If those possibilities are changed by an observer or experimenter, the wave changes accordingly. Just as a wave can be split into parts and then recombined after passing through or around obstacles, the wave of possibilities can be split apart and can be merged too. Always, like the great oceans that surround us, the wave persists.2

“Now think of a cheetah that has been captured and thrown into a miserable cage in a zoo. It has lost its original grace and beauty, and is put on display for our amusement. We see only the broken spirit of the cheetah in the cage, not its original power and elegance. The cheetah can be compared to the laws of physics, which are beautiful in their natural setting. The natural habitat of the laws of physics is higher-dimensional space-time. However, we can only measure the laws of physics when they have been broken and placed on display in a cage, which is our three-dimensional laboratory. We only see the cheetah when its grace and beauty have been stripped away.”3

Recent science has also challenged the belief that physical matter is completely inanimate, unresponsive, and substantive. In their explorations of wave functions, scientists have found physical reality to be both ” idea-like” and “matter-like.” The division between mind and matter, which corroborated the Christian division between heaven and earth, is not true scientifically. The physical…

…[M]atter is never entirely passive… rather… material things actively “solicit our attention” or “call our focus,” coaxing the perceiving body into an ongoing participation with those things. In the absence of intervening technologies, sensory experience is inherently animistic, disclosing a material field that is animate and self-organizing from the get-go. Drawing upon contemporary cognitive and natural…

In the parallel universe model, the wave of possibilities is something that at first sight appears magical. Let me describe its properties. First of all, it is a wave and it can be imagined to do all the things that waves do. It undulates, vibrates, and moves through space and time. When the wave encounters…

Tegmark on Consciousness as Quantum Matter

Nothing is accidental in the universe – this is one of my Laws of Physics – except the entire universe itself, which is Pure Accident, pure divinity.

Mistakes are the portals of discovery.

A discovery is said to be an accident meeting a prepared mind.