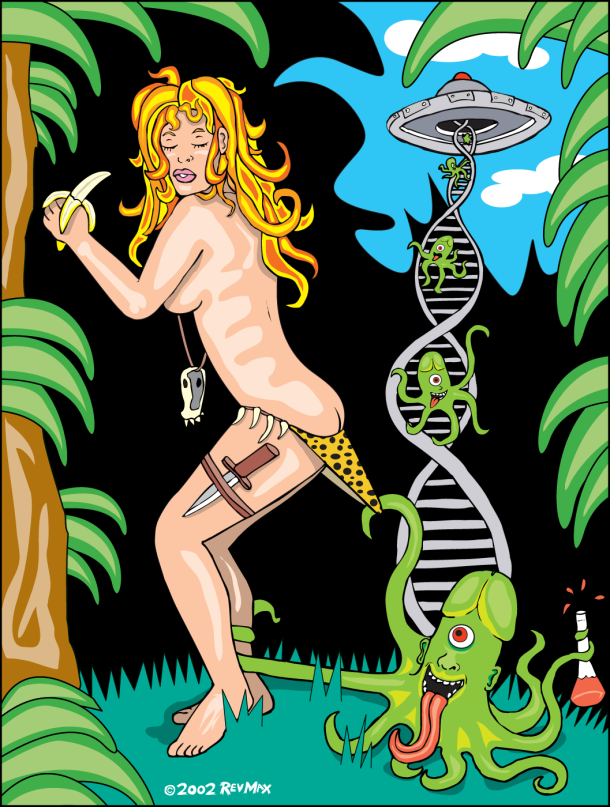 The Archons Lie to Norea and try to Rape her

It was not Noah who was the hero of the flood story, but Eve’s daughter Norea – a fiery, rebellious young woman who sabotaged Noah’s ark, rejected Yaldabaoth’s lecherous advances and finally escaped on the wings of an angel.

Yaldabaoth, the story goes, was so disturbed when he realized that mankind had begun to “multiply and improve”1 that he decided to drown the whole Earth in a flood, killing all of the smart humans and saving only the stupid ones. Noah was especially pliable and dull-witted, so Yaldabaoth chose him to build an ark.

It wasn’t long, however, before Eve’s daughter Norea discovered Noah’s ark and tried to board it. Noah refused to allow Norea to board the ark, so Norea breathed fire and burned Noah’s ark to the ground:

“Then Norea came to him, wanting to board the ark. And when he would not let her, she blew upon the ark and caused it to be consumed by fire. Again he made the ark, for a second time…” 2

Things continued like this for a while, with Noah rebuilding the ark and Norea setting it on fire. Eventually, Yaldabaoth realized that Norea was too much trouble to drown, so he decided to descend to the earth and rape her instead:

“The Rulers went to meet [Norea], intending to lead her astray. Their supreme chief said to her, “Your mother, Eve, came to us.”

But Norea turned to them and said: “It is you who are the Rulers of the Darkness; you are accursed. And you did not know my mother; instead it was your female counterpart that you knew. For I am not your descendant; rather it is from the World Above that I am come.”

The arrogant Ruler [Yaldabaoth] turned with all his might. He said to her presumptuously, ‘You must render service to us, as did also your mother Eve.’ ”3

Norea cried out to the heavens for help and was rescued by Eleleth (Hebrew=”Understanding”), an Aonic angel  who taught her about her origins and destiny in the world beyond time:

“Do you think these Rulers have any power over you? None of them can prevail against the Root of Truth… You, together with your offspring, are from the Primeval Father; from Above, out of the imperishable Light, their souls are come. Thus the Authorities cannot approach them because of the Spirit of Truth present within them…”4

On land, female apes always had known who the alpha males were, and those males enforced their sexual rights with…

Perhaps it was not only a shortage of food that sent man to the water in the first place, but…

Science explains what draws humans to the sea

Our ancient ancestors came out of the water and evolved from swimming to crawling to walking. Human fetuses still have…

The Aquatic Ape Theory states that approximately 6-7 million years ago, our ape ancestors were trapped in a semi-aquatic environment.…

The mind is like an iceberg, it floats with one-seventh of its bulk above water.

Have you ever watched a crab on the shore crawling backward in search of the Atlantic Ocean, and missing? That’s the way the mind of man operates.

Ocean: A body of water occupying two-thirds of a world made for man – who has no gills.