God and His Angels Rape Eve 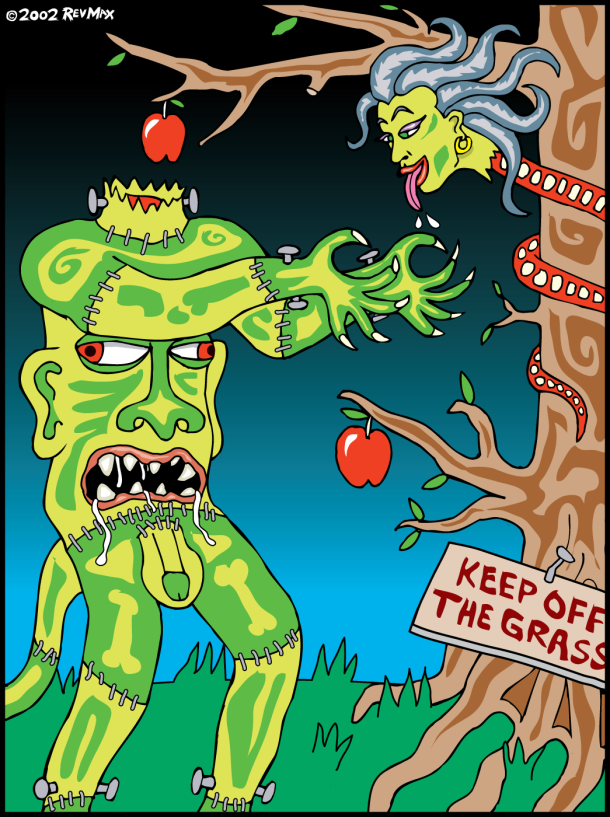 Eve enters the Tree of Knowledge

The Rulers laid plans to impregnate Eve and create a slave race to worship them, but Eve simply laughed and hid in the Tree of Knowledge, leaving her sperm-spilling suitors with naught but a ghostly decoy.

“…Eve, since she existed as a power, laughed at their false intention. She darkened their eyes and left her likeness there stealthily beside Adam. She entered the Tree of Knowledge, and remained there. But they tried to follow her. She revealed to them that she had entered the tree and become tree. And when the blind ones fell into a great fear, they ran away.”1

Struggling back to consciousness as though from a trance, the Rulers attacked and sodomized the simulated Eve, unaware that she was a mere hallucination – a projection of their own, sick minds:

“Afterwards, when [the Rulers] sobered up from the stupor, they came to Adam. And when they saw the likeness of that woman with him, they were troubled, thinking that this was the true Eve.

And they acted recklessly, and came to her and seized her and cast their seed upon her. They did it with a lot of tricks, not only defiling her naturally but abominably, defiling the seal of her first voice, which before spoke with them, saying, ‘What is it that exists before you?’

…And they were deceived, not knowing that they had defiled their own body. It was the likeness which the Authorities and their angels defiled in every form.”2

The Psychopathology of MPD

Perhaps the most bizarre example of compartmentalization is the psychopathology referred to as multiple personality disorder, in which one body…

Power of the God Meme

Memes can produce actual physical sensations. For example, the “God meme” is powerful not only because it has “great psychic…

Frankenstein took some flesh and bones and blood and made a man out of them; the man ran away and fell to raping and robbing and murdering everywhere, and Frankenstein was horrified and in despair, and said, I made him, without asking his consent, and it makes me responsible for every crime he commits. I am the criminal, he is innocent. … [That’s exactly] the case of God and man… God made man, without man’s consent, and made his nature, too; made it vicious instead of angelic, and then said, Be angelic, or I will punish you and destroy you. But no matter, God is responsible for everything man does, all the same; He can’t get around that fact. There is only one Criminal, and it is not man.