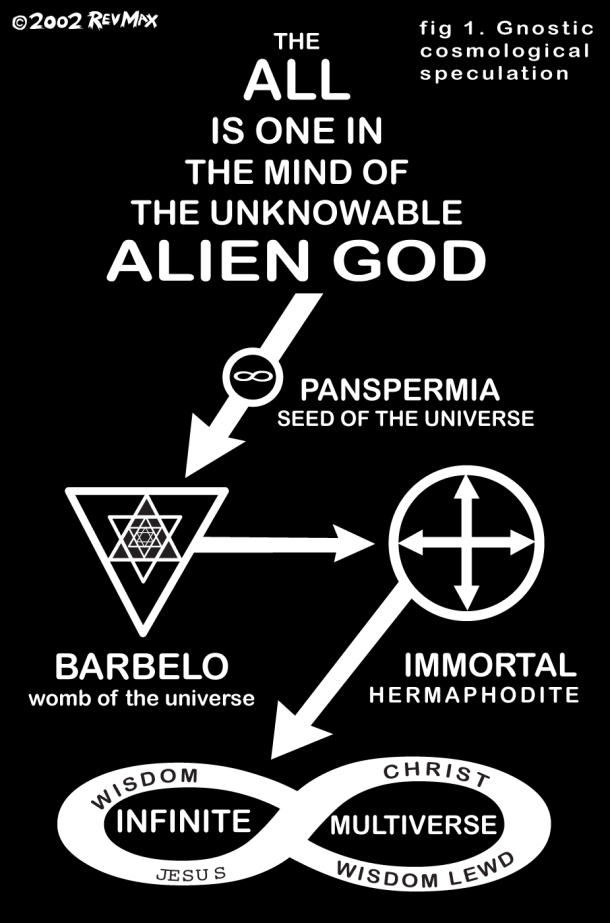 “Seeing that everybody, gods of the world and mankind, says that nothing existed prior to chaos, I, in distinction, shall demonstrate that they are all mistaken…” (1)

Gnostic creation myths are unbelievably complex, bizarre and convoluted; compared to such texts as the “Secret Gospel of John” and “On the Origin of the World,” the Genesis book of the Old Testament is a compact miracle of simplicity and precision. But why should these two different strains of Christianity diverge so wildly from one another in their creation accounts?

An analogy can be drawn with the “Big Bang” theory of physics, which states that space, time and matter came into being simultaneously and then expanded rapidly from a point a trillion times smaller than a pinprick into the vast phenomenal universe we live in now. The “Big Bang” theory doesn’t make any claims about where this point came from, what existed before it, or how it was produced – instead, it simply notes that the universe went from microscopic to vast in the blink of an eye.

The “Big Bang” is often misunderstood as a sort of explosion in outer space, but this can’t be the case, because before the big bang, there wasn’t any space for matter to explode into. Everything we know, and everything we don’t, all have their origins in this first little point of space, time and matter. We can’t look at anything outside our universe, or look back in time and see what came before it, because there is no outside and no before to look into. Our universe, in short, is self-contained.

A scientist who studies this universe from the inside is like a prisoner in a cell who makes educated guesses about his captors by studying the bricks and bars which enclose him. Various facts about our universe are known – it is flat, it is expanding, and it is about 15 billion years old. Where it came from in the first place, however, remains an object of speculation.

It could be, for example, that the big bang was but one of many big bangs in an endless cycle of universes which expand and contract in sequence, almost like breathing (the “oscillating universe” scenario); or it could be that our universe was the result of a quantum fluctuation in a pre-existent vacuum (Guth’s theory of “inflation”); or perhaps it had a “parent” universe which birthed it through the “branching” off of parallel universes or even through the expansion and “budding” of a miniature big bang from within a black hole! (2)

In short, physicists do not deny that the big bang occurred. Where they differ from each other is in their willingness to speculate about what caused it and whether or not it was unique.

In a very similar way, we can look at the standard Biblical creation account and see that what it describes is basically same as the big bang: God’s spirit brooded over the void, over chaos, and then said “Let there be light!” Presto! Space, time and matter came into being, and the universe expanded forwards from that point.

Just as modern physicists do not deny that the big bang occurred, the ancient gnostics did not deny that a creator God made our universe either. Where the gnostics differed from their orthodox counterparts was in their speculations about what occurred before this. If a creator god made this universe, then where did he live before that happened? Did he make our universe because he was forced to leave his old one for some reason? And who created God, anyway? These are the sorts of questions the gnostics tried to answer in their Pre-Creation myths.

Since what happened before the big bang is really anybody’s guess, there exist dozens of different scientific theories about its’ origins, all of them equally unprovable – and in the very same way, the gnostics, too, put forth dozens of equally improvable theories concerning the origins of God.

While it would be impossible to cover all of these theories thoroughly, we can hit a few of the high points and areas of common agreement, and take a look at what these might have meant.

1. On the Origin of the World, Translated by Hans-Gebhard Bethge and Bentley Layton

Although theoretical cosmologists say there is no conceivable way that we could escape from our universe or observe another one, I am often asked what other universes might be like IF we could visit them. Because there are an infinite number of ways that fundamentals such as time, space, gravity, matter and energy can be…

This means that there’s probably a Universe where you were never born, but everything else is the same. Or perhaps your mother had extra brothers and sisters for you, in which case your family is much larger. Now, this can be compared to sitting in a room, listening to radio. When you listen to radio,…

A new cosmology is emerging that says there are many more dimensions than this one -that earth exists in one particular dimension that has a particular atomic frequency – that other frequency forms from other dimensions can penetrate and even overlap our Space-Time, as different radio and TV signals can move together in a single…

There is reality behind the world as it appears to us, possibly a many-layered reality, of which the appearances are the outermost layers. What the great scientist does is boldly to guess, daringly to conjecture, what these inner realities are like. This is akin to myth making.

If the universe is truly infinite, and an infinite number of other realities consisting of parallel dimensions and alternate universes are real, then everything that could happen is happening somewhere.

Everything you can imagine is real.