Eating from the Tree 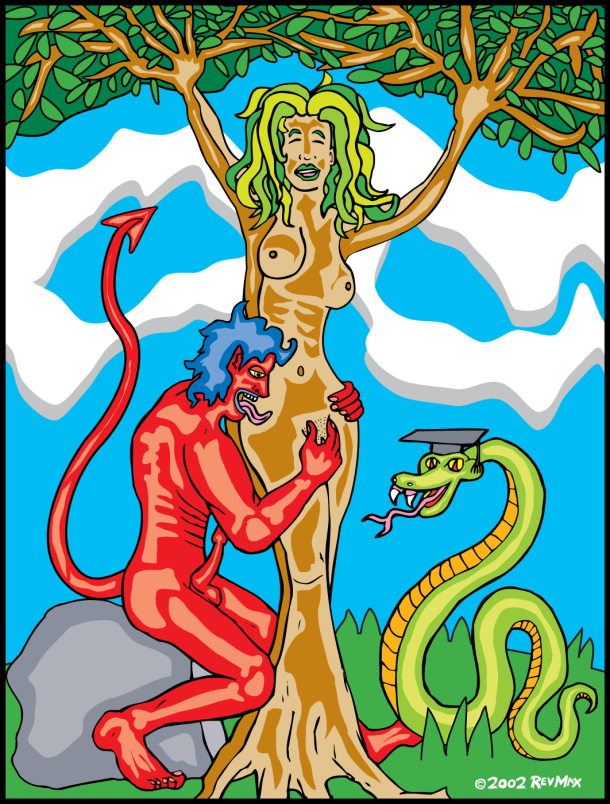 Tree of Knowledge, Tree of Life

Adam ate from the Tree of Knowledge and absorbed some of Eve’s divine force. The surge of living, intelligent energy in his nervous system triggered a spontaneous kundalini arousal, opening a direct channel between his reproductive organs and his brain and blowing his third eye open.

Suddenly able to see into non-ordinary reality, Adam could now perceive the archons for what they truly were – loathsome alien parasites dedicated to fear and oppression:

“You are the Tree of Knowledge, which is in Paradise, from which the first man ate and which opened his mind, so that he became enamored of his co-likeness, and condemned other alien likenesses, and loathed them.”1

The veil lifted from their minds, Adam and Eve were restored to sanity and could now voice their perceptions with humor and imagination:

“They assert… that Christ was the one called by our Scriptures the Serpent, and they assure us that they have been given insight into this in order to open the eyes of knowledge and to distinguish between Good and Evil… God, who issued the Law through Moses, and who spoke through the Hebrew prophets, was not the true God but one of the Rulers of Darkness…”2

Regions of the Brain

Magic mushrooms may give users trippy experiences by creating a hyperconnected brain. The active ingredient in the psychedelic drug, psilocybin, seems to completely disrupt the normal communication networks in the brain, by connecting “brain regions that don’t normally talk together,” said study co-author Paul Expert, a physicist at King’s College London. The research, which was…

Each and every atom in your brain and body is connected to each and every atom everywhere. Indeed the most profound connection is between the atom and its sisters or brothers in the local parallel universes that immediately surround it. Those universes make up its electron wave cloud. As long as no attempt is made…

When that happens, the final stage of “identification and transference” begins. The cultist sees he has been duped. The person who has accomplished this revelation is the deprogrammer. They two are on the same side. The cultist identifies with the deprogrammer. Together they become opponents of the cult. According to Dr. John G. Clark, Jr….…

Jung on the Gnostic Adam

The figure of Adam is a highly important symbolic figure in Gnostic and Hermetic writings, and C.G. Jung wrote extensively about it. He represents primordial man,” the “original being, ‘ the “man of Earth,” the condition of primal innocence and unity with all life as described in the Bible’s account of the Garden of Eden.…

The human body has two ends on it: one to create with and one to sit on. Sometimes people get their ends reversed. When this happens they need a kick in the seat of the pants.

Man consists of two parts, his mind and his body, only the body has more fun.

All Bibles or sacred codes have been the causes of the following Errors.

1. That Man has two real existing principles Viz: a Body & a Soul.
2. That Energy, call’d Evil, is alone from the Body, & that Reason, call’d Good, is alone from the Soul.
3. That God will torment Man in Eternity for following his Energies.

But the following Contraries to these are True

1. Man has no Body distinct from his Soul for that call’d Body is a portion of Soul discern’d by the five Senses, the chief inlets of Soul in this age
2. Energy is the only life and is from the Body and Reason is the bound or outward circumference of Energy.
3 Energy is Eternal Delight.