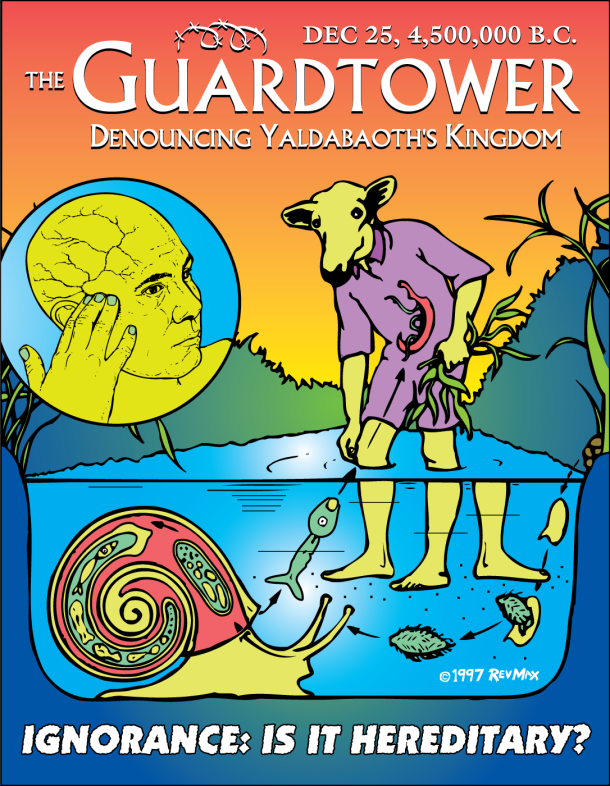 Immortal Man in the Garden of Eden

When Yaldabaoth realized that his creation was threatened by Immortal Man, he began to preen and bluster shamelessly:

“… when he actually knew that an enlightened, immortal man existed before him, [Yaldabaoth] was very much disturbed….

…Like a fool [he] acted recklessly, and said, “If someone exists before me, let him appear so that we might see his light.” And immediately, behold, a light came [from] above, and passed through all the heavens of the earth.1

Immortal Man could only reveal himself to Yaldabaoth indirectly; even so, Yaldabaoth was shocked when the primal cosmic human appeared as a reflection in the pooling waters of Paradise, a hologram from a higher dimension sent to haunt the Demiurge with the vision of his own collapse.

Immortal man dove back into his own reflection, hiding himself from the Yaldabaoth and the Rulers once again. The Rulers howled with laughter and pointed at Yaldabaoth. Yaldabaoth, they now knew, was not only clumsy, but a liar too:

“[Before] Immortal Man withdrew, the authorities saw him in Chaos. They laughed at the Chief Ruler because he lied, saying, “I am God. No one else exists before me.””3

So Yaldabaoth devised a cunning scheme: with the help of the Rulers, he would create and give life to a race of creatures called “humans,” beings with immortal, intangible spirits and the easily controlled bodies of naked, primate slaves.

“[Yaldabaoth] answered and said: “Yes, but if you desire that he not be able to destroy our work, come, let us create a man from the earth according to the image of our body and according to the likeness of that one, in order that he may serve us…

Then he will no longer ruin our work, but we shall make those who will be begotten from the light servants to ourselves…”4

The powers of Chaos would drag Immortal Man down to earth. They would fragment, overpower and trap his essence in their experimental golems. Immortal man would lose his identity and his mind; he would turn against himself, hypnotized by the sight of himself in so many separate beings.

Obviously the rationalistic approach to reality is one-sided: the principles of time, space and causality should be supplemented by the principle of synchronicity. And this means that both the absurd world of the unconscious within and the absurd nonsense of the world outside is pervaded by a mysterious and awe-inspiring Sense. Old-fashioned people would call…

…after decades of hunting, Torrey and his colleagues think they have finally found the infectious agent. You might call it an insanity virus. If Torrey is right, the culprit that triggers a lifetime of hallucinations… is a virus that all of us carry in our bodies. “Some people laugh about the infection hypothesis,” says Urs Meyer,…

If aliens were to swoop in from outer space and squeeze a human down to see what we’re made of, they would come to the conclusion that cell for cell, we’re mostly bacteria. In fact, single-celled organisms—mostly bacteria—outnumber our own cells 10 to one, and most of them make their home in the gut. The…

Perhaps the visions that we see are mere epi-phenomena, no more than our unconscious selves and our present culture desperately seeking a way to comprehend these alien intruders within our minds – psychic invaders from across the universe. If so, then are they probing for information, extracting data from us or taking genetic codes [?]…

I like nonsense, it wakes up the brain cells… it’s a way of looking at life through the wrong end of a telescope.

Life is a whim of several billion cells to be you for a while.