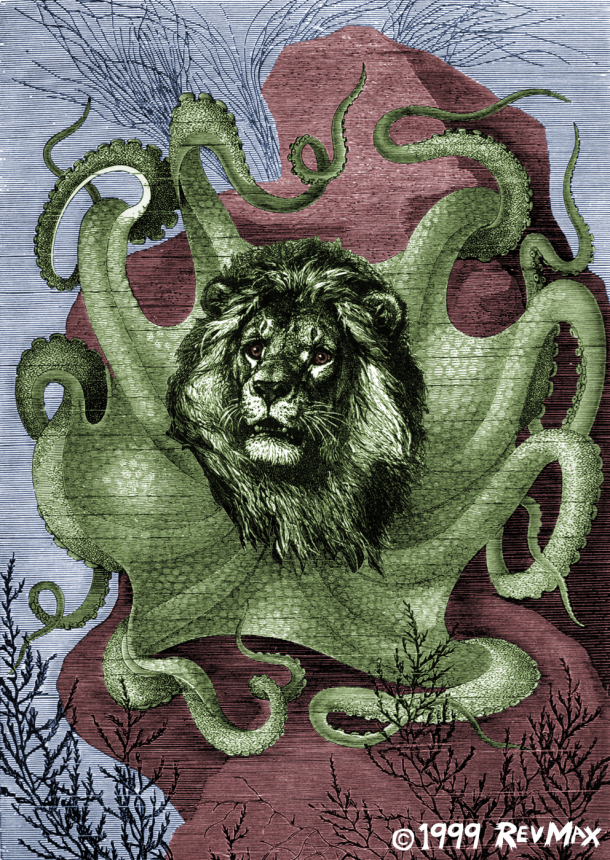 Sophia Hurls Yaldabaoth back into the Darkness

As Sophia looked down into the swirling void, a monstrous creature swam forth from the darkness – an insane fallen angel called “the Demiurge”:

“…a Ruler first appeared out of the waters… having a great authority within himself, but not knowing whence he came into being.” 1

Disgusted by her accidental creation, Sophia threw the Demiurge back into the darkness, where he landed with a splash:

“When Sophia saw what her desire had produced, it changed into the figure of a snake with the face of a lion… She threw it away… so that none of the Immortals would see it. For she had produced it ignorantly.” 2

Even though there is not yet any incontrovertible proof that black holes exist, most astronomers have become convinced that they must be forming in great numbers right now. If they are, then… some of them may have gobbled up entire galaxies by then. 1 Morris, Richard. The Fate of the Universe. Camden House, 1982. 134 [↩]

General relativity theory under the maximum stress of matter’s distortion of space and time predicts the existence of a new beast in the world – a black hole, the most distorting region of spacetime anywhere, anytime. 1 Wolf, Frederick Alan. Parallel Universe: The Search for Other Worlds.  Simon & Schuster, 1988. 110. [↩]

Huge and mighty forms that do not live like living men, moved slowly through the mind by day and were trouble to my dreams.

The world of men is dreaming, it has gone mad in its sleep, and a snake is strangling it, but it can’t wake up.

History… is a nightmare from which I am trying to awake.

All the things one has forgotten scream for help in dreams.