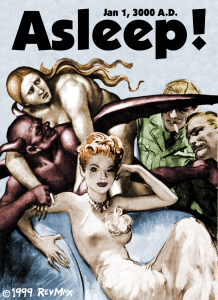 ” When they saw Eve speaking with him, they said to one another, “What is this female light-being? For truly she is like the likeness which appeared to us in the light. Now come, let us seize her and let us cast our seed on her, so that when she is polluted she will not be able to ascend to her light, but those whom she will beget will serve us.

But let us not tell Adam that she is not derived from us, but let us bring a stupor upon him, and… teach him in his sleep as though she came into being from his rib so that [she] will serve and he will rule over her.”