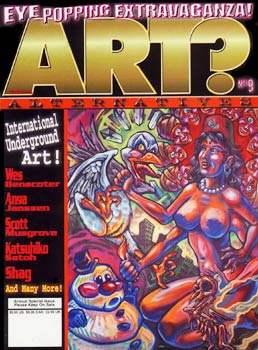 Back in 1994, one man began having startling realizations about “the very foundations of [his] being.” He… discovered several texts describing gnosticism, one of the three main branches of primitive Christianity. “Somehow, these ancient Christian heretics had already discovered and written about almost every thing I had always suspected” [he later claimed]. Now, as the Reverend Illuminatus Maximus, a modern gnostic, he uses the internet to educate the masses through the Gnostic Friends Network. Let the Reverend tell you in his own words, his interpretations of these rediscovered texts.

“The gnostics were true spiritual anarchists. They didn’t believe in hell or the devil, original sin or the crucifixion of Jesus. They believed that this entire universe is just a dream in the mind of a Supreme Being who is basically unknowable. The God of the Bible is actually a fallen angel named Yaldabaoth who created the earth as a prison so that he could trap human souls here and trick them into worshipping him. The holy cosmic serpent almost freed us once, but Yaldaboth prevailed.

The gnostics were constantly writing new scriptures, based on their own dreams and otherworldly insights. Their goal was not to be “saved,” but to remember where they came from and “snap out it” – to be enlightened. Some gnostics lived in the desert as celibate vegetarians. Others practiced sex magic and held orgies as a way to celebrate Easter. Gnostic teachings were so popular that they almost threatened to completely take over this new religion of Christianity. Eventually the Roman Empire adopted the orthodox Christian Church, the gnostics’ main rivals, and the gnostics were exterminated. Their scriptures were buries in a jar in the Egyptian desert in 380 A.D. and weren’t discovered again until 1945. But their legacy lives on.

My website and my art are all about gnosticism because I love what they stood for – freedom and imagination. They were killed for it back in the day, but as the saying goes, you can’t kill an idea. And what the gnostics represented is something so powerful, so profound, that it’s only going to come back even stronger than before, which is this: mythology is how we visualize the trajectories of our own lives. And people have the right to TELL THEIR OWN STORIES without anyone threatening to burn them at the stake or accuse them of heresy. The word “heresy” even means “free choice”!

Another reason I am drawn to gnosticism is because the original gnostics left no art behind when they were wiped out by their opponents, so their mythology is basically a blank slate. Nobody has ever tried to illustrate it before, except me. I’ve been writing and doing art about gnosticism on the web for five years now, and every day I discover something new, either about them, or about myself. Gnosis is eternal for the same reason art is eternal – its about the never-ending quest to answer the big questions: Where do we come from? Why are we here? gnosticjesus.com is my attempt to answer those questions.”

The Rev. Illuminatus Maximus’ website, [the] Gnostic Friends Network, can be accessed at [https://www.gnosticshock.com]. He also has plans to update the site as an online encyclopedia, featuring in-depth articles about all forms of gnosticism, all footnoted and hyperlinked. You can email the Reverend here.1