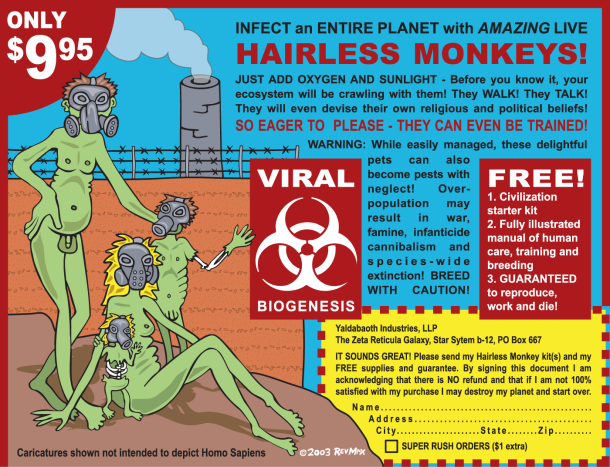 As the gnostic scriptures reveal, the Garden of Eden was not a paradise, but a prison laboratory where fallen angels called “Archons” conducted a series of bizarre experiments in an attempt to produce a compliant strain of primate slaves. Banished from the stars at the dawn of time, these “archons” (Greek for “rulers”) fled to the Earth where they abducted a caveman named “Adam” and sexually assaulted his mate “Eve,” implanting both with false (or screen) memories:

When they [the archons] saw Eve speaking with [Adam], they said to one another; “Come, let us seize her and let us cast our seed on her, so that; those whom she will beget will serve us. But let us not tell Adam that she is not derived from us, but let us bring a stupor upon him, and teach him in his sleep as though she came into being from his rib.”1

Feared and worshipped as “gods” and “angels,” the Archons depend for their very existence on the energy captured and siphoned from the human nervous system via various control systems – biological and memetic thermostats which allow them to regulate the flow of information and energy through words and images, pleasure and pain:

They say that the soul is the food of the Archons and Powers without which they cannot live, because she is of the dew from above and gives them strength…2

Adam and Eve “fell” when the archons programmed them with prohibitions and commandments, changing them from primates living in the eternal “now” to “soft machines” – biological automata at war with their own instincts, parasitised by selfish replicators and paralyzed by double-binds:

….when the Rulers saw [Adam] and the woman who was with him, erring in ignorance… they rejoiced greatly… They came to Adam… [and] said to him, “Every tree which is in Paradise, whose fruit may be eaten, was created for you. But beware! Don’t eat from the Tree of Knowledge…” [T]hey gave them a great fright….3

Then one day, like the shoot of a vine or a flower pushing forth from the soil in the spring, the serpent arose from inside Adam and Eve, opening up a direct superhighway of bioelectric energy along the “tree”  (or “spine,” in Hebrew) and rushing from their loins to the crowns of their skulls.

“Some of them say that the serpent was Sophia [the Goddess of Wisdom] herself; for this reason it was opposed to the maker of Adam and gave knowledge to men, and therefore is called the wisest of all [Gen. 3:1]. And the position of our intestines through which food is taken in, and their shape, shows that the hidden Mother of the shape of the serpent is a substance within us.”4

Their whole bodies vibrated like organic antennae as the walls of the garden fell away, revealing the larger world outside and above their cage. Like lab rats suddenly lifted out of a maze, Adam and Eve suddenly perceived their own situation clearly for the very first time:

“Then their mind opened. For when they ate… they saw that they were naked, and they became enamored of one another. When they saw their makers, they loathed them since they were beastly forms. They understood very much…”5

Terrified, the archons cast Adam and Eve into the ordinary world of work, sleep and death to live out their lives in amnesia and drudgery. But all is not lost.

Within every person, these energies exist lying dormant – the tree, the serpent and Eve (i.e., genetic memory) too. The Garden of Eden and the archons will always be with us, existing in an eternal realm just outside normal awareness, a hidden dimension accessible via dreams and ritual, trance and vision. When we are ready, this world and the spirits in it reveal themselves, so that we too may join the serpent in asking:

“But of what sort is this God? First He maliciously refused Adam from eating of the tree of knowledge. And secondly he said, “Adam, where are you?” God does not have foreknowledge; otherwise, would he not know from the beginning?”6

Whether the mushrooms came from outer space or not, the presence of psychedelic substances in the diet of early human…

The Tree of Knowledge and the Neocortex

Hallucinogenic Mushrooms and the Knowledge of All Things

Ambrosia-eaters often enjoy a sense of perfect wisdom, resulting from a close co-ordination of their mental powers. Since ‘knowledge of…

The Tree of Knowledge as the Spine

“Wisdom (knowledge) is a tree of life to them that lay hold of her,” the mystery teachers said, and by…

Taken in its deepest sense, the shadow is the invisible saurian tail that man still drags behind him. Carefully amputated, it becomes the healing serpent of the mysteries. Only monkeys parade with it.

He who undertakes to guide men must never lose sight of the fact that they are malicious monkeys.

We are just an advanced breed of monkeys on a minor planet of a very average star. But we can understand the Universe. That makes us something very special.

The surest way to make a monkey out of a man is to quote him.