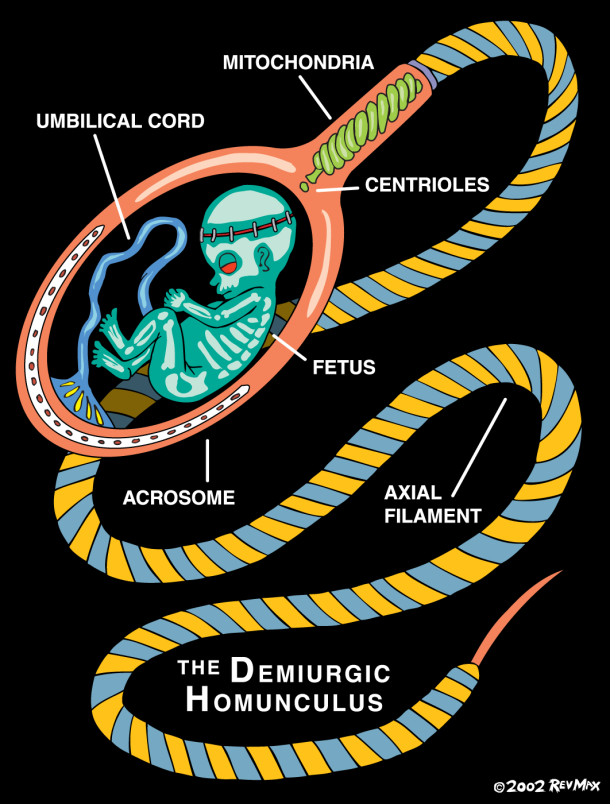 Adam (the first man) was a misbegotten android, spawned when Yaldabaoth tried to duplicate and enslave a reflected vision of Immortal Man which startled the Rulers when it appeared in the waters of paradise.

“Now the Rulers took some soil from the earth and modeled their Man, after their body and after the Image of God that had appeared to them in the waters.”1

“…the First Father gave those who were with him a false intention concerning the man. Then each one of them cast his seed on the midst of the navel of the earth. Since that day, the seven Rulers have formed the man: his body is like their body, his likeness is like the man who appeared to them. His molded body came into being according to a portion of each one of them. Their chief created his head and the marrow.”2

Another describes Adam as a pathetic, spineless creature who crawled on his stomach:

“The (first) human being was a creation of angels [but was] unable to stand erect because of the angels’ impotence, and rather writhed on the ground like a worm….”3

Not only was Adam’s body freakishly flawed, but Yaldabaoth wasn’t even confident enough in his power to risk bringing his experimental golem to life – instead he left him comatose and inert, like a lobotomized chimp in a cage:

“For Adam was a laughingstock, since he was made a counterfeit type of man by the Rulers.”5

The first vertebrates, the ancestral line of animals that led to the human race, appeared on earth at least 40 million years earlier than previously believed, according to British scientists studying fossils of enigmatic, worm-like creatures called conodonts. Their conclusion is based on new evidence that the gripping teeth of ancient conodonts were made of…

With no room for discussion or Q&A, a press release from European Molecular Biology Laboratory asserted, “Modern brains have an ancient core.” How ancient? At least as far back as the marine ragworm. Continuing the confident assertions, it went on to say, “Multifunctional neurons that sense the environment and release hormones are the evolutionary basis…

A little cooling down of animal excitability and instinct, a little loss of animal toughness, a little irritable weakness and descent of the pain-threshold, will bring the worm at the core of all our usual springs of delight into full view, and turn us into melancholy metaphysicians.

If men cease to believe that they will one day become gods then they will surely become worms.

Man is certainly stark mad. He cannot make a worm, and yet he will be making gods by the dozen.